Behemoths of the sea

In the places where the most imposing military vessels are built, including the first PPA, equipped with the most powerful of gas turbines.

On a bright December morning, the Italian east coast of Liguria is as enchanting as ever. With its colorful streets, shimmering sea and the small and dainty villages all around, the relaxed atmosphere and absence of traffic couldn't be more different to how it is in summer. It is along the stretch of coast between two of the most popular destinations of the “dolce vita” - Portofino and Le Cinque Terre - where one would not expect to see two of the largest shipyards in Italy, nestled among the hills of the Ligurian Apennines dipping down towards the Mediterranean.

Riva Trigoso (district of Sestri Levante town) and Muggiano (district of La Spezia) are the two main sites that produce military vessels for Fincantieri, whose military division is based in Genoa. Fincantieri is the largest shipbuilding industry in the western world; they have a 230-year track record and 20 shipyards. Eight shipyards are in Trieste, Italy where the company is based. The company employs around twenty thousand people at its two sites. Products include vessels ranging from immense cruise ships to mega yachts (upwards of 70 metres); and from offshore support vessels to submarines and, indeed, military vessels.

Fincantieri is a long-term partner of the Italian Navy, for which it has built and continues to build the largest vessels in the national fleet. It is also partnered with the US Navy and many other foreign navies. Just three years after the FREMM—the  new European Multi Mission frigates for the Italian and French navies—work began in February on the first new Multipurpose offshore patrol vessel (Pattugliatore Polivalente d’altura, PPA).

At the end of November, the technicians of GE Aviation’s Avio Aero Brindisi delivered the first LM2500+G4 turbine module of GE, the same that powers the FREMM vessels. Seven turbine modules have been commissioned. The Italian Navy will receive the first in 2021 and the remaining six over the following years, with delivery of the final one by 2026. 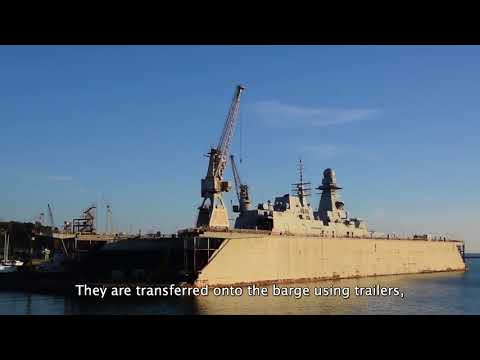 Building a vessel of about 133 meters (in the case of the PPA) or even 144 meters (the length of the FREMMs, 19.7 meters wide) brings to mind children’s’ Lego constructions: the amusing parallel with toy models is an easy way to approach a specific production process of mammoth dimensions. The earliest phase of construction involves cutting the first steel sheet.

"The vessel consists of blocks assembled according to a procedure that starts from the center of the vessel and continues with the construction and assembly of the longitudinal and vertical sections of the hull,” said Paola Riva, Production Manager at the Muggiano shipyard, in an attempt at a simple explanation. In this small town in the Gulf of the Poets, the shipyard built part of the first FREMM (though the first sheet was cut in Riva Trigoso) and started the construction of the first PPA. "Riva Trigoso and Muggiano form a single integrated shipyard, and at the moment we have begun construction of the second PPA in Riva. The bow of the latter is being built here in Muggiano to later join the rest of the vessel.”

Before we can understand how two parts of a vessel are joined, it is useful to remember how the blocks are assembled together in what are called sections. Each block is formed by cutting sheets 12.5 meters long and 2.5 meters wide. Altogether, a block weighs up to 70 tons. Cranes are required to move and put it into position - either vertically or horizontally - for the assembly of the hull and the external structure of the vessel. At the Muggiano shipyard, the cranes end up lifting 140 tons when used in pairs due to the increasing weight of the blocks under construction.

"The blocks which form the hull are then set up during the subsequent stages of production," added Paola Riva. “This means that all the internal equipment is installed: pipes, cables, bases, machinery, modules, including those for propulsion and the furnishings. A structure is formed that can accommodate about 170 people, and it’s capable of generating electricity as well as being seaworthy.”

Cranes are required to move and put it into position - either vertically or horizontally - for the assembly of the hull and the external structure of the vessel.

Then there are the major structures: the barges and floating dock. The barge is a floating platform that can be towed out to sea. The vessel, or parts of the vessel, are transferred to the barge using trolleys. Eventually they are moved (or added) to the rest of a vessel under construction. The distances are relatively small in the case of the two shipyards along this stretch of the Ligurian coast, but people who work for Fincantieri will tell you about transfers on barges towed for hundreds of nautical miles: from Muggiano to Castellamare di Stabia (Naples), for example.

The vessel is moved by the barge to the floating dock, where it is launched: the dock is flooded and the vessel is put to sea. After the launch, outfitting is completed with tests and inspections on the vessel while it is moored to the quay (before delivery to the customer). The floating dock also serves as a dry dock for maintenance on the hull of the vessel. The way the team at Fincantieri makes handling the floating and navigable buildings simple indeed!

The installation of the turbine module is one of the steps of construction for the vessel.  The GE LM2500+G4 Marine Gas Turbine is built and tested by GE at their Cincinnati (Ohio) facility and then shipped to Avio Aero Brindisi where the turbine is installed into the Base and Enclosure (and where about 20% of the LM2500 components are also produced) to be then delivered to Fincantieri. The Avio Aero thermal/acoustic enclosure is based upon the design of the GE LM2500+G4 Base and Enclosure installed aboard the US Navy’s LHD-8 Amphibious Assault Ship.  Avio Aero technicians - like Giuseppe Cosi and Antonio Rutigliano, who installed the first turbine on the first PPA - are also responsible for the service life of the turbine and its maintenance.

“I have had to work on all sorts of military aircraft engines during my career," said Giuseppe, who is a member of the service team in Brindisi. “Over the last few years, I have worked with these gas turbines and mainly in the naval field. They are powerful, and it is perhaps for this reason I find working with this kind of engine particularly stimulating. Operations can take anything from a week to several months.” The LM2500+G4 turbine in fact can deliver a maximum power of 35MW, able to drive the PPA at over 30 knots (almost 60Km/h) in combination with the rest of the engine, which also includes two 10MW diesel engines and two electric motors powered by the four generators that supply energy to the other on-board users.

The “propulsion package” has formed an integral part of the offer of Avio Aero with  GE Marine Gas Turbines since the first collaboration with Fincantieri for the Lupo and Maestrale vessels. "The LM2500+G4 installed on the PPA is an advanced turbine that allows GE Marine and Avio Aero to meet the high-performance needs of our customers. Preparing a product that is effective, reliable and seaworthy is the key to success—even during the concept design phase, a phase that sees our teams working in tandem,” said Enrico Ferrari, Head of Design of Engine Equipment and Auxiliary Equipment for the Naval Division.

Before the production stage, which can take 22 to 24 months for a vessel of this size, crucial design work is required. At Fincantieri, design involves: basic design, concept design and product development. The general concept design, which considers the main needs of the customer, involves the most painstaking work and can take up much more time than production. It can sometimes take years.

Furthermore, the PPA sets an unprecedented feature into the partnership between the naval industry with GE Marine and Avio Aero.  “The turbine module involved a joint effort," explained Pierpaolo Berardi, the Program Manager of Avio Aero responsible for collaboration during the phase of delivery of the first module. "We worked with the engineers of Fincantieri, pooled our skills and gave the staff specific training.” "I have had to work on all sorts of military aircraft engines during my career, but Gas Turbines are powerful, and it is perhaps for this reason I find working with this kind of engine particularly stimulating"

Fincantieri's Propulsion Module Project Engineer, Alessandro Trucco, also felt like it was a unique experience. “This new collaboration has definitely strengthened our relationship. For the first time, we assembled a turbine module in-house, with our Mechanical Systems and Components Management department,” he said. In fact, by collaborating with Avio Aero’s engineers, Fincantieri procured all the components of the propulsion system, prepared the internal assembly instructions and physically assembled the components of the turbine module.

According to Trucco, "we have gained better understanding of the operation and characteristics of the components of the turbine, and acquired know-how for the integration of a complex module on-board a vessel. At Riva Trigoso, we set up a special “Clean Area” for the in-house assembly of the module. All this joint work will allow us to offer customers new options in the future.”

Since foreign navies are showing more than just mild curiosity in the patrol vessels and their propulsion systems, we can safely say that adventures at sea on board these giants are bound to reach many shores and horizons.

A little Iliad set in Piedmont

The sky in a room