The power of attitude

The "International Day of People with Disabilities", with the initiatives in our offices and the story of Giulia Lamarca, wheelchair travel blogger and ambassador for in-flight accessibility.

Each year, on December 3rd, we celebrate the International Day of People with Disabilities, established by the UN and the European Commission with the aim of promoting the rights and welfare of people with disabilities. In Italy alone, there are about three million disabled persons: that is, 5.2% of the entire population. These figures tell there is no longer time to postpone the removal of architectural and cultural barriers that hinder the lives of those with disabilities.

It is necessary that everyone contribute for what they represent, from institutions to companies, down to the individual; it is necessary to understand the value that diversity gives to any context, from organizations to any social situation; and, not least of all, disability must be treated as a fact and as such must be treated with naturalness and suspension of judgment.

The preconditions are sufficient so that realities such as Avio Aero can not only make a commitment to include diversity within their own community, but to decide to raise awareness and give voice to the power of diversity. Thus special initiatives have been organized to celebrate and raise awareness for this issue among the internal population (and not only) in all the cities where the company is present. In Brindisi, real "Games without barriers" have been organized in various sports such as basketball and relay race; in Turin they have tried their hand at Caribbean dances, learning steps and choreographies to partner dances, working with the students of a dance school for disabled children in the area; in Pomigliano d'Arco, they celebrated the Christmas season by participating in the rehearsals of a local theatrical association; and in Bielsko Biala they have delved into sign language with a workshop. All this was possible thanks to the collaboration of more than 15 associations. The meeting with the psychologist and traveler Giulia Lamarca, who brought her testimony of inclusion and resilience to the entire Avio Aero community, wrapped up these widespread initiatives. Giulia is 28 years old, from Turin, with a degree in psychology. Around the world she is known for her adventures as a traveler in the most curious and fascinating places that our planet has to offer and that she tells us about daily on Instagram and on her blog: mytravelsthehardtruth. Among the most recent destinations are: Indonesia, Spain, Japan, Thailand, Sri Lanka and many more.

On October 6th, 2011 Giulia was on a motorcycle in the hills of Turin, but something went wrong, the bike slipped, Giulia fell, and the consequences were far more serious than expected. Three months after the accident, the doctors confirmed to Giulia what she had started to fear during that period: "It will be difficult for you to walk again". Since then, a path has begun that has led her to be the symbol she is today: a beautiful traveler who, from her wheelchair, tells the story of her life and serves as a role model for those like her who live with a different perspective.

"After the accident I immediately understood what had happened, I got confirmation when my dad caressed my leg at the hospital and I could not feel it," says Giulia. "Now I have regained my sensitivity. Back then, when the specialists confirmed the situation, it was not particularly traumatic, I had already discovered it on my own. In fact, it may be fate, but the night before I had watched an episode of Grey's Anatomy where they did a tremendous spinal operation. When I saw my X-rays, I thought: well, the star of the episode was not any better off!" "I love flying and I wish that people like me who live in a wheelchair could be free to travel without too many obstacles, often bureaucratic or structural"

She doesn't like the word "special" used in this context "there will never be a nice word to describe something so traumatic". In this story, there still was something a bit special: the hospital. "While I was in the hospital I met many people, some of them were patients, others were not. Among them, there was a physiotherapy intern who I immediately understood that I had struck a chord with, in some way. I'm a person who always laughs and when I went to the hospital, there was always music. I brought a positive attitude and maybe that's why he noticed me. At a time like that, when I needed confirmations from life, getting attention from a man made me really happy. And so, one day he wrote to me, after ending a previous 4-year relationship." The man's name is Andrea. Now he is Giulia's husband and together they share a passion for travel.

And the hope of walking again is not at the top of her mind, on the contrary. "I decided not to live in hope but to live in the present. If it were to happen, it would be welcome. But what would be the point of dedicating your life to pursuing something uncertain, in my case? I would stop living in the present for something that is uncertain. You have to love each other and release the anchor from the past. My greatest victory is to like myself the way I am now."

Now, Giulia is a person who is satisfied with her path and the place she has reached. In addition to travelling, she has recently become an ambassador for in-flight accessibility: "I love flying and I wish that people like me who live in a wheelchair could be free to travel without too many obstacles, often bureaucratic or structural. A while ago, I was contacted by some young students from Politecnico di Milano who, dealing with a project in which they had to design the interior of an aircraft, involved me in a behavioral analysis for their work. My opinions, not technical but on the use of the services, helped them to observe certain details differently." 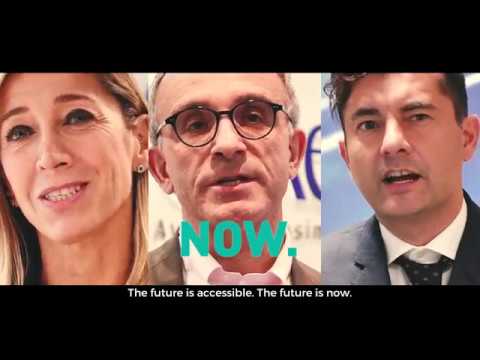 "Perspective is the real power of diversity, whether it be disability or otherwise," says Carlamaria Tiburtini, D&I Leader of Avio Aero. "Giulia's testimony makes us understand the value of the heterogeneity that we constantly try to feed and encourage interaction with inside the company.

At the moment, Giulia has many projects in mind. Among others, she is writing a book, and it is in her creative vein that she wants to underscore that "superheroes do not exist, but we must not judge ourselves by what we lack; rather, by what we know and what we can do, which is certainly much more". So, Giulia, we hope you will continue to do what you told us in these two days: inspire, travel and smile. Thank you.

STEM from customer to customer

The rise of Baby Talents