The air show in Le Bourget ended with electrifying outcomes for both Avio Aero and GE: from military and commercial engines, helicopters, up to the European commitments for the future.

The most important week of the year for the aviation industry has reached its conclusion and was a sparkling success for GE Aviation. At the Le Bourget show, in the year marking its centenary, the company took home orders worth more than 55 billion dollars, thanks to the crucial contribution of CFM (the 50% joint venture between GE and Safran). Thanks to this, dozens of operators, new and old customers, have booked hundreds of LEAP engines for their brand new fleets of Airbus 320neo and 321neo and Boeing 737 MAX.

Orders from all over the world, with the astounding highs of the Indian IndiGo that has ordered 560 LEAP-1A for its fleet of Airbus 320neo and 321neo, or Air Asia that has booked 200 engines of the same model for its A321neo, optioning contracts to serve its immense fleet that tallies a total of 800 new LEAP-1A engines. Avio Aero also has reason to smile because of CFM’s coup, as it produces the key components of the low-pressure turbine and the combustors of all versions of the LEAP engine.

Orders for new engines, including GEnx for the 787 Dreamliners, but also service contracts and digital products, such as Flight Pulse™ or support programs such as True Choice™ and avionics products. At the end of the week, GE Aviation had more than doubled last year's result at the British Farnborough air show (held in even-numbered years). Aircraft manufacturers and companies from all over the world thronged the conference rooms and pavilions at the air show on a daily basis to sign agreements that ensure GE and Avio Aero have a robust order book for the next 10, or even 20 years. While the commercial results far exceeded expectations, the show was not to be outdone. Besides the flight displays and previews by numerous aircraft manufacturers of their new models, on the first day of the show - a world premiere for the audience present and connected on social media channels - the spotlights of GE Aviation's exhibit area lit up the mammoth GE9X that powers the new Boeing 777-X.

A Hollywood-style debut for the record-breaking engine, as big as the fuselage of a 737 and with more than 700 units already ordered by the most famous airlines on the planet, even before its entry into service scheduled for the end of the year: to date, the GE9X has completed hundreds of hours of testing and about three thousand takeoff and landing simulations.

This new engine contains technological innovations which are at the cutting edge, notably the TiAl blades of the low-pressure turbine produced by Avio Aero in Cameri and finished in Pomigliano d'Arco. Innovations that make it 10% more fuel efficient than its predecessor the GE90, as well as being the quietest commercial engine from GE Aviation and the one with the lowest NOx emissions in its category. 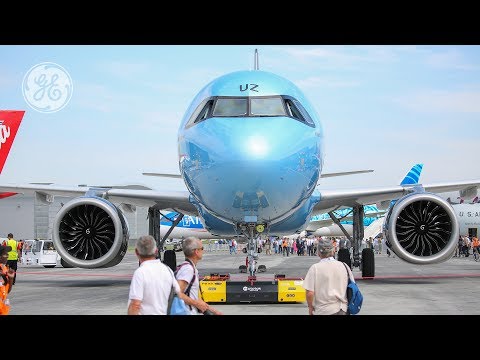 But alongside its contribution to the stellar successes of the parent company, Avio Aero has recorded other very important results, as the European brand of GE Aviation. Starting from the renewed and enhanced commitment to the continent’s research and development for the engines of the future, with the objective of "decarbonisation" and reduction of gas emissions and noise levels, signed at the show along with Industry Leaders, Research Organizations, University Associations and the European Commission as part of Clean Sky - JU, the most important programme in Horizon 2020.

At Le Bourget, Avio Aero's CEO Riccardo Procacci confirmed his intention to proceed towards the third iteration of the research programme alongside his counterparts from the main players in the sector (including Airbus, Leonardo, Rolls-Royce, Safran, Thales and UTC Aerospace Systems) and who are shifting the course of the aeronautical industry of the future. The guiding principles of the revamped partnership are always in line with the objectives contained in the Paris Agreement on climate change and the reduction of CO2 in the air.

On the commercial side, Avio Aero has also announced two exclusive new partnerships with major Eurasian players. The first, in chronological terms, is with the Russian VR-Technologies, part of Russian Helicopters, which aims to become a leader in the civil helicopters sector. The Italian center of excellence in Rivalta di Torino will be responsible for designing and manufacturing the entire principal transmission system for the new VRT500: a 2-ton class helicopter based on an innovative counter-rotating rotor architecture. In support of the brand-new program, Avio Aero has already begun construction of an advanced test rig.

And there’s more: another new helicopter, this time from Turkish Aerospace Industries, the national leader in Turkish aerospace: from technological research to design and production for a wide range of civil and military aircraft, helicopters and aerospace systems. Avio Aero will work on the Gökbey T625, the new helicopter will see the application of Italian technology to the transmission casings of the main rotor and the tail rotor. The cases of the T625 Gökbey will be produced in the Turin Borgaretto plant. "I’m very proud of this new partnership" said Riccardo Procacci during the air show. "Currently, at Borgaretto we produce cases both in aluminum and magnesium, for the main civil and military aircraft engines. We are working on very complex castings enabled by the most advanced technologies such as magma simulation and 3D core printing. Indeed, new production and design systems based on digital technologies have been implemented in the Turin plant.

"I hope therefore that this agreement with Turkish Aerospace could be the first step of a synergistic partnership both in industrial terms and from a design point of view," he added. Procacci. "While the new partnership with VR-Technologies is the proof of our cutting-edge technology in power transmissions We are proud to partner with this company that inherits a successful industrial tradition of over 70 years and ranges from the lightest to the heaviest helicopters used in the most hostile environments. We are very committed to the helicopter market and the new partnerships, such as the one with VR-Technologies, are not only confirmation of this but they also open the way to more advanced and innovative technological solutions in the future." From Le Bourget airport, everything points to a bright future for the company as well as for the entire sector: and after the eye-catching spectacle of the air show, staff are now preparing for an equally extraordinary undertaking.