Avio Aero goes for the double

The modules for the second engine to test in the GE9X program have been delivered, and work is pressing ahead on the next modules for dispatch to the USA.

At the six Avio Aero plants where the components of the world's greatest new-generation commercial engine are built, delivery of the first 9X is already just a memory. Mainly because the work on the about 800 part numbers (which include even the smallest individual parts of an aircraft engine component) has gone ahead without a break, enabling delivery - in early March in the United States - of the low pressure turbine (LPT) module complete with Fan Hub Frame, and the sister LPT module complete with Turbine Rear Frame, actually built by Snecma and assembled at the Pomigliano plant. This was accompanied, a couple of weeks later, by delivery of the Accessory Gear Box.

At the time of the FETT (first engine to test) of the GE9X, almost exactly a year ago, we published a full account of the work on both modules. Things started to hot up, in production terms, for our technicians, workers and engineers a few months after the FETT: the road to the entry into service of the engine to be powering versions 9 and 8 of the brand-new Boeing 777-X aircraft, replacing the B777-300ER, led through a series of improvements and fine adjustments, which were finalized during this period. These same finishing touches will also apply in preparation for the upcoming deliveries of modules for the third and fourth test engines (scheduled soon, in April and June). Engine tests on the GE9X are performed at the GE Aviation center in Peebles (Ohio).  It is always useful (and fascinating) to look back at how the two main products, low pressure turbine and accessory gear box (AGB), as well as other essential components (oil tank, FHF, IGB and TGB), come to life in our plants.

The low pressure turbine is assembled in the new area of the Pomigliano plant, where the various parts of the LPT come together like the pieces of an international jigsaw puzzle, supplied by Risk Revenue Sharing Partners (IHI from Japan and Snecma from France), as well as our parent company in the USA. Specifically, the RSP firms provide the Turbine Rear Frame, mounted immediately behind the LPT, and the Fan Hub Frame, completed at Pomigliano and installed right behind the engine's huge main fan. Pomigliano also produces the shrouds (which line the inside of the case containing the entire module) for turbine stages 4, 5 and 6 and the blades of the 4th turbine stage, and finishes the 5th and 6th stage blades, additive-manufactured in TiAl at our Cameri center. The massive case that contains the whole low pressure turbine is built at our Brindisi center of excellence. All the LPT nozzles are produced at Bielsko Biala, in Poland. Apart from the oil tank and other small parts, the Rivalta headquarters produces the stage 1, 2 and 3 shrouds and the seal of the 6th turbine stage. Rivalta also manufactures both the inlet and the transfer gearboxes (abbreviated to IGB and TGB respectively), installed in the middle of the FHF, through which the drive shaft passes and which drives the IGB and TGB and through them the AGB, another of the Turin plant's specialties. “Without a doubt, what makes the difference in Avio Aero,” says Ashley Havera, GE9X Manufacturing Manager for GE Aviation, “is the pride and leadership shown by every single member of the team. This is why Avio Aero is producing more components for the GE9X than for any other GE commercial engine program. For example, it's amazing how in just two years an empty, dark Avio Aero factory building has been transformed into a state-of-the-art assembly area for the 9X turbine module, with all that implies in terms of sourcing and installing machinery, tools and accessories."

This "parts catalog" makes up about 20% of the new-generation GE9X, the first test on which provided invaluable technical and operating feedback in the form of data and guidance for both our engineers and the supply chain. It delivered the raw material for improvements and simplifications ranging from checks on the tolerance and performance of every single piece (such as the sealing features or nozzles, for example) to optimization to meet requirements such as weight and emissions, to make the 9X commercial aviation's next world-beater.

It seems straightforward, but in fact testing of the complete engine impacts and interacts with every single module and component it contains, the way all these individual parts perform and operate, and thus the design and manufacturing process of every last component. Another very significant detail: the GE9X is the first engine to be created in the digital industrial era, and from the very first phases of its development masses of data were acquired about every single component designed, prototyped and tested, to ensure future traceability. Measurements and records of the main operating characteristics, not to mention the design of the LPT, for example, were acquired starting from supply of the small parts and during machining processes, and will be useful throughout the engine's lifecycle, or rather its service life. The same method was applied to the ADT (accessory train drive), meaning internal parts such as gears, bearings and static structures.

This data will be used for prevention, statistics and maintenance. “A lot of the information acquired in this way," Massimo Martini, Systems Engineering Senior Technical Leader, explains, “is already useful and usable for other engines under development - with regard to LPT performance, for example. For the first time, we are seeing a really new way of looking at programs destined to become aviation milestones." Full of 4.0 enthusiasm, we can report that the GE90's new successor is already being integrated with its “digital twin”, ready to support the predictive phase, not to mention the actual monitoring, of the engine soon to take to the skies on the brand new 777-X. 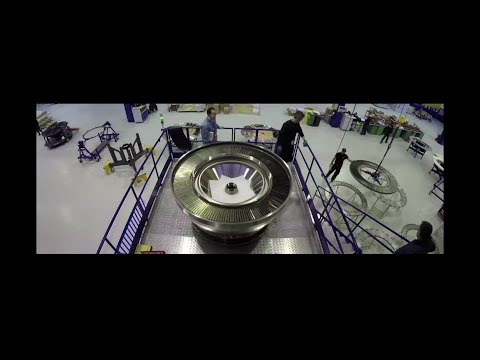 And the award goes to….