110 years of Avio Aero as seen from inside the Air Force aeronautical Museum going through a special journey of extraordinary stories, twisted with the aviation industry and much more.

Quite often, we use to complain of how many places in our country we haven't visit yet. They may be just few miles far from where we live. For example, the lake Bracciano is found in Lazio, an Italian region amongst the richest places of interest, as well as one of the largest. This enchanting stretch of water, with its beautiful landscape with typical lake fauna, is also home to the most important water reservoir serving the city of Rome and a portion of its province.

But the surprises, for those who have never explored the Bracciano area and who may be aviation geeks, do not end there at all. On the southern side of the lake is the Vigna di Valle, Luigi Bourlot Military Airport, the most famous water airport in Italy, which is also home to the Museo Storico dell’Aeronautica Militare (Air Force History Museum). Among the top five aeronautical museums in the world, it spreads over almost 14,000 sqm. Inside it, you can admire more than 80 aircraft, helicopters, airships and seaplanes, from 1909 onwards. One year earlier, in 1908, the then Fiat Aviazione - Avio Aero's ancestor - built the first piston airplane engine, the SA 8/75.

It would take an entire book to collect and recount all the heritage present at Vigna di Valle Museum, an immense venue for thrilling events that travel the twentieth century, intersecting with international political, economic, national and industrial history. This magical place is even the home to the oldest flying object in the world. Lake Bracciano seems to be predestined for the cult of aviation, with a nodding reference to Manzoni or the poet Virgil who made immortal other lakeshores. In fact, the aeronautical value of Vigna di Valle was fated since 1804. " Andrè-Jacques Garnerin’s balloon is the oldest exhibit at the museum, while the first airplane on display is the Wright brothers Flyer4" says Lt. Col. Fabio Ruggieri, Deputy Director of the Museum.

“In 1804, French General Garnerin proposed to Napoleon to fly a balloon to celebrate the formation of his empire in Paris. So, on the day of the acclamation, not far from Notre Dame, the balloon took off. But a whirlwind extinguished all the torches that illuminated it in the sky and tore it away, igniting the anger of the superstitious emperor, who immediately saw it as a disastrous omen and sent Garnerin away," says Ruggieri, revealing how fate landed that balloon right on Lake Bracciano. "Obviously, when it was discovered the local workers and fishermen were forced to hand over the mysterious flying object to the Pope since the powerful Vatican State occupied almost all of central Italy. But when the museum opened in 1977, then Pope Paul VI returned it as a gift.”

The annals of aviation credit 1903 as the year of the first flight of a motor plane when Wilbur and Orville Wright, brothers originally from Ohio (perhaps another sign of destiny, since GE Aviation headquarters stand in the same state), flew for about 59 seconds in that wheel-less aircraft called Flyer, powered by a 15 HP engine. "At the museum we have the engine from the Flyer 4, it’s a replica even though it has real mechanical parts" continues Ruggieri from the first of four hangars that house aircraft of all kinds from every decade of the twentieth century. "The Wright brothers made several flights, building several planes and engines. The one in our museum still works, even!" And the Flyer 4 is not the only engine still working: there are at least another couple of engines, almost or more than a hundred years old, perfectly oiled and still capable of being fired up at the museum.

The skills of the Air Force personnel at the Luigi Bourlot airport are amazing. It is not just the wow effect due to the background who guided us inside the Museum, as well as through the special video reportage in this page (covering the 110 years of history from the CA36 engine to the legendary G91), or even the team of historical consultants specializing in different eras, and also in digital production and graphics. The military personnel at Vigna di Valle even own the technical, restoration, assembly and recovery skills for aircraft and engines for which probably only half the assembly and maintenance manuals exist. “The Andrè-Jacques Garnerin’s balloon is the oldest flying object in the world, and it is displayed at the Museum."

In 1904, where the museum's entrance is today, Vigna di Vale began its aeronautical activity: there was an experimental aeronautics laboratory in the same location. In 1909, it was the flight pad for the first Italian airship. On the same note, Umberto Nobile’s expedition’s memento and equipment of are conserved here. Nobile organized the first and second (unfortunately fatal, although completed) exploratory mission to the Arctic Circle.

In the museum antique engine systems and technologies are displayed too: such as the propeller pitch controls and the counter-rotating propellers, that are still focal points for the study of aircraft engines that have yet to enter into service, or have only been tested as technological demonstrators. You also find sensational witness of the excellence and technology exchange between aviation experts from different continents.

One example of this is the Caproni CA36 (the first aircraft in our historical video-reconstruction that presents an engine that was the ancestor of Avio Aero) which takes its name from its designer, Gianni Caproni, who - in that exciting era of ocean crossings and exploration, as evidenced by a vintage photo exhibited in the museum hangar - met the American Pilot Commander Fiorello La Guardia (who was successively going to become Mayor of New York City and then to name one of the Big Apple’s airport). The American fell in love with the CA36 so deeply that he returned to New York after extolling the quality and performance of the Italian aircraft with his compatriots. The USA ordered more than a hundred CA36 aircraft. "In reality, at the beginning of First World War, Italy wasn’t able yet to design and build an entire aircraft, even though it produced engines," Lt. Col. Paolo Nurics with his team of historians from the Italian Air Force continue the story. "As terrible as the circumstances were, World War I benefited technology and the aviation industry. In fact, war conflicts were the occasion that drove countries to invest as much as possible in research and production. So, only in 1916 did Italy begin to seriously engage in the aeronautical industry. The first models were the Ansaldo SVA, the reconnaissance and bombing biplanes, all single-seaters except the famous and unique model (the SVA 5) on which Gabriele D'Annunzio flew over Vienna in 1918 as a passenger, pitching thousands of flyers that invited the Austrians to surrender.

At that time, Italy realized that aviation was a sector where it showed great potential, and so the works of great engineers, such as Giuseppe Caproni, began to go down in history, through to the fathers of the current Avio Aero Engineering, that is Tranquillo Zerbi, Celestino Rosatelli and (advancing to the 1960s) Giuseppe Gabrielli, who designed machines for brave fearless pilots, and for the Armed Forces. Indeed, it was between the 1920s and 1930s that Mario De Bernardi or Francesco Agello's exploits took place, setting airspeed and performance records that, in some cases, are still unbeaten today.

Among the legendary aviators of the '30s, one in particular continues to be an extremely significant reference point for Italian pilots, and beyond: Italo Balbo. "From the aeronautical viewpoint, Balbo's immortality lies in his revolutionary and brand-new concept for the period: he was the first to have teams in the air, because he was an excellent organizer and a great logistics expert," explains Nurcis, pointing out that Balbo was the inventor of "teamwork" in aviation, actually. 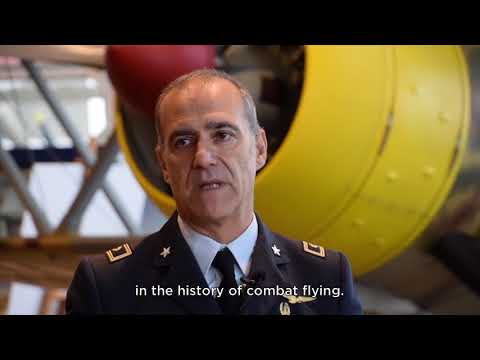 "Balbo organized two ocean crossings, called Atlantic Cruises at the time, which went down in world history: the first was made with 12 aircraft to Brazil, the second with 24 to the United States. And in both cases, the biplanes had two in-line engines, with a propeller pushing on one side (towards the tail of the plane, ed.) and another pulling on the other side. The second expedition is undoubtedly the most epic: not only because it was the celebration of the tenth anniversary of the then Royal Air Force and it involved twice the number of aircraft, but because Balbo and his crew were acclaimed guests of honor at the 1933 Chicago World’s Fair. Balbo's innovative approach marked the aviation world so much that, even today, when pilots fly using that in-flight positioning (aircraft grouped by 3 and going upwards) they use to call it 'Balbo Formation!'  And we can’t forget that President John F. Kennedy, about thirty years later, mentioned Balbo's transoceanic enterprise when introducing the Apollo project to the Congress."

At the end of a visit to the Vigna di Valle museum – and we recommend you take a guided tour or that you at least get some of the Air Force staff member’s anecdotes - what is incredibly fascinating, on top of the wonder of aircraft in the four hangars, is the informal habit of the Air Force military personnel to speak in first person plural. The soldier’s way of recounting historical events that occurred 80 or 90 years ago, by saying "we flew first on this aircraft," or, "we did a maneuver of this kind ...", sounds like a clear result of the Balbo’s influence. He would certainly be proud of how the Italian Air Force feels united still, despite the centuries gone by.